A new tell of TeliaSonera in Nepal market

KATHMANDU, APRIL 5: Teliasonera--fifth largest telecom company of Europe--has now direct or indirect investment in two telecom companies—Ncell and Nepal Satellite in Nepal. It has acquired indirectly 51 percent of the shares in Cyprus based Airbell Services that owns 50 percent stake in Nepal Satellite.

At the same time, Mahato who had been holding 20 percent stake in Ncell, has transferred his ownership of the share to his business partner Niraj Govinda Shrestha who is also an NRN from Russia. The duo—Mahato and Shrestha have jointly investment in number of countries including in Nepal. Shrestha has investment in banking and hydropower sector in Nepal.

As per the teliasonera report, it has bought 50,000 shares of the Nepal Satellite Telecom at 174 million Swedish kronor (equivalent to Rs 2.13 billion). Besides the 50 percent of Airbell, the remaining 50 percent of the Nepal Satellite share are shared among -- Muktishree Telecom 40 percent, Samjhana Aryal (Lalitpur) 5 percent, Pakistan Mobile Communications 3 percent and Bangladesh based Sheba Telecom owns 2 percents, according to Nepal Telecommunications Authority.

However, a local investor in Nepal Satellite, Ajay Sumargi said that he was not aware of any changes in Airbell’s stake in the company. “I don know anything on this issue,” said Sumargi, who is also the director of the Nepal Satellite.

Nepal Satellite is considered rich one with the spectrum it possesses. It has a total of 14.6 MHz (5.6 MHz in GSM 900 band and in 9 MHz in GSM 1800 band), of which only around 15 percent is in the use with 0.14 million users. Moreover, on Tuesday, NTA has issued international distance calls (ILD) gateway licence to Nepal Satellite. With this, the operator will be able to easily send and receive international traffic which has become a main source of income for other operators so far

Meanwhile, Teliasonera on Thursday said that it reached an agreement in order to further increase its ownership in Ncell. It has also sold 18.6 percent stake in Cambodian operator Smart Mobile, in line with its strategy to be a strong majority owner in core holdings such as Ncell.

nice posting.. thanks for sharing..

So, europians are very interested to spend in Nepal ?

Hey man you have compiled a lot of info about this...Great work

Hello i am looking to contact Mr Shrestha, do you happen to have his details? If so please could you email me xanwood@hotmail.com thank you

Road to development or disaster? 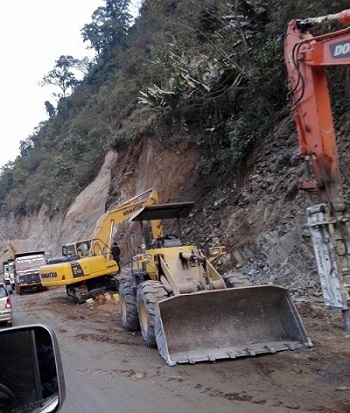 Heavy equipment vehicles were seen on duty few months ago in a section of East West Highway for road widening works. As there has been major focus only in road construction not on how to make such infrastructure sustainable, landslides have been a major problem.

How is voice telephony service in Nepal?